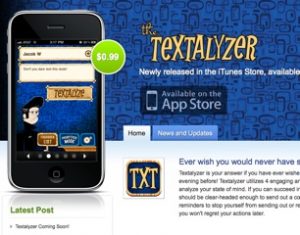 The “Textalyzer” is a device that allows law enforcement officials to review an individual’s cell phone usage using a machine that was developed by forensic technology maker Cellebrite. When the Textalyzer is connected to a target’s cell phone, it reveals if and when a phone was active and lists the apps that were being viewed or used and the times at which the phone was active. The Textalyzer has not yet been deployed for use by law enforcement personnel, but proponents and opponents have raised justifiable concerns regarding how the technology will be used to reduce texting and driving while balancing Fourth Amendment privacy concerns.

The name Textalyzer is so-named because of the device’s similarity to the breathalyzer device as both are a means of subsequently collecting data following an accident or traffic stop. Thus, defense attorneys have raised concerns about the implications on regulating the effects of refusing to consent to a Textalyzer analysis. If an individual is pulled over on suspicion of drunk driving, he may refuse consent to a breathalyzer, but withholding consent will result in an automatic one-year suspension of the driver’s driving privileges. So, if a similar requirement is imposed upon individuals stopped on a suspicion of texting and driving, individuals may be forced to choose between relinquishing control of their cell phone over to law enforcement officials or lose driving privileges for a year. However, proponents of the Textalyzer argue that the design of the technology itself prevents the infringement of citizens’ Fourth Amendment protections against unreasonable searches and seizures. The device only reveals if the phone was being used and how it was being used. It does not display the content of a text message or email. But, while the device in its current state does not appear to have the capability or option of displaying the content of texts or emails, it is only a matter of time until prosecutors begin to ask for an expansion of the technology to afford them the opportunity to view the content of those messages as a means of solving more serious crimes.

Right now, because the Textalyzer is not in use, drivers can only be charged with texting and driving if they are caught “red-handed” in the act of texting while operating a motor vehicle. Thus, the deterrent effect of the statute in its current form is minimal, as the burden on law enforcement officials is great and the risk of enforcement as to each individual driver is low. The opponents of the Textalyzer technology admit that texting while driving is indeed a problem necessitating some action as an attempt to minimize the frequency of texting and driving. To be sure, texting and driving includes not only sending a text message while operating a motor vehicle, but also prohibits the use of a cell phone generally while operating a motor vehicle. Before enacting a statute authorizing the widespread implementation of the Textalyzer as a means of combatting texting and driving, legislators must weigh the importance of combatting the use of cell phones while individuals operate motor vehicles with privacy concerns and individuals’ Fourth Amendment rights.

According to one AAA poll, 94% of teen drivers acknowledge the dangers of texting and driving, but 35% admit to doing it anyway. Moreover, anyone who regularly drives on public roads has undoubtedly seen, and/or been frustrated by a distracted driver  who is paying closer attention to their phone than the road. So, the question is not whether drivers using a cell phone while driving is a problem, as it is indisputable that distracted driving is prevalent and dangerous. Rather, the question is to what degree privacy rights should be infringed upon to combat distracted driving, as the authorization of using a Textalyzer will inevitably be granted to law enforcement officials. In fact, it has been reported that New York, Tennessee and Illinois all have legislation being debated, but such legislation will likely look very different in each of the states given the varying political constituents in each jurisdiction. As with any sort of legislation that varies from state to state, it is likely safe to assume that we could be seeing a Supreme Court Textalyzer case in the next several years.

The Law Offices of Kevin C. Ford represents clients throughout Georgia that have been injured and suffered damages as the result of distracted and inattentive motorists.  If you or a loved one has been injured as the result of the negligence of such a motorist, then it is imperative that you contact an experienced injury lawyer immediately.  Please contact Kevin Ford at the Law Offices of Kevin C. Ford today to learn more about your rights!