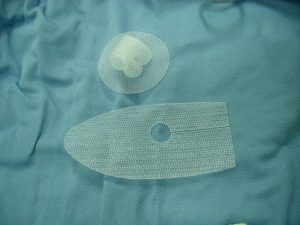 The Boston Scientific Corporation manufactured a transvaginal mesh prescription medical device that was designed to prevent the pelvic organs from falling through the vagina. The mesh sheet is made from a type of plastic and is implanted surgically into the patient. The plaintiff, Amal Eghnayem, had the sheet implanted in February of 2008 to treat her pelvic organ prolapse, but began to experience severe negative reactions in the following months. Amal experienced bleeding and pain during intercourse, incontinence and pelvic pain and pressure, and during an examination it was revealed that she had exposed mesh that was causing her severe symptoms. After an unsuccessful attempt to alleviate her pain, Amal visited a second doctor who found another mesh exposure and performed a second mesh-removal surgery. Following the second surgery, Amal’s pain subsided but by that time she had lost vaginal sensitivity. Amal subsequently filed suit seeking compensatory and punitive damages based on claims for negligent design defect, negligent failure to warn, strict-liability design defect and strict-liability failure to warn. Additionally, three other plaintiffs filed lawsuits and the United States District Court for the Southern District of West Virginia consolidated the suits.

At trial, the jury found for each of the plaintiffs on all four claims and awarded more than six million dollars to each plaintiff. The Boston Scientific Corporation appealed from the judgment on two separate grounds. First, the Boston Scientific Corporation argued that the district court abused its discretion by consolidating the plaintiff’s four suits and trying them together.  Second, the Corporation argued that the district court abused its discretion by excluding all evidence relating to the Food and Drug administration’s clearance of the mesh for sale through the FDA’s “substantial equivalence” process. The trial court excluded the evidence under two different Federal Rules of Evidence. The first, Rule 402, provides that irrelevant evidence is not admissible, and the second, Rule 403, provides that relevant evidence may be excluded, “if its probative value is substantially outweighed by a danger of . . . unfair prejudice, confusing the issues, misleading the jury, undue delay, or wasting time.”

Thus, perhaps a more sophisticated and nuanced understanding of the Federal Rules of Evidence might have led to a different result for the Boston Scientific Corporation. All too often, winnable cases are lost due to poor litigation and trial strategy. While it can be easy to second-guess strategic decisions in hindsight, the difference in losing and winning a case can in large part depend upon counsel’s ability to anticipate the opposing party’s plan and develop a strategy that will most effectively counter it in the eyes of the jury. The plaintiffs’ strategy in this case was sound, as consolidating claims allowed for the plaintiffs to benefit from the evidence that varied from plaintiff to plaintiff while eliminating any gaps in evidence that may have been detrimental to any one of the plaintiff’s cases standing alone. The particular facts of any one case are the greatest determinative factor in the outcome of litigation, but an attorney with successful litigation experience can be the difference between a close win and a close loss.

The Law Offices of Kevin C. Ford represents clients throughout Georgia that have been injured and suffered damages as the result of a hernia mesh implant surgery.  If you or a loved one has been injured as the result of the negligence of a health care provider and/or manufacturer of hernia mesh, then it is imperative that you contact an experienced injury lawyer immediately.  Please contact Kevin Ford at the Law Offices of Kevin C. Ford today to learn more about your rights!