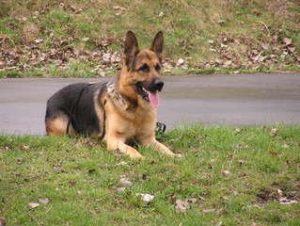 Recently, I settled an outstanding lawsuit against an owner of an alleged “service” dog that was brought into a national chain of steakhouses in Greater Atlanta.  Nowadays, it is not surprising to see service dogs in retail stores, restaurants and other public spaces.  For my earlier post regarding “service” dogs and dog bites,  click here.

The backstory on our case is that the owner of the dog was on a trip from West Coast and passing through Georgia on her way to the East Coast with her friend.  Along for the ride was a mixed breed large male dog that growled at the hostess on the way into the restaurant and again at the manager of the restaurant on the way out after the attack.  Several other employees were also ready and willing to testify as what occurred after the dog bite.  Upon deposition, it was clear that the owner of the dog was a difficult and angry person.  There was no evidence available to indicate that the dog was involved in prior attacks/bites at people/animals prior to our claim.

My client was a young server at the restaurant and did not ask the defendant whether or not her dog was an authentic  and genuine “service” dog at the time of service pursuant to a mix of restaurant policy and nebulous law from a county/state perspective.  What actually constitutes a “service” dog is still up for debate from a city/county/state/national analysis and there are no clearly enforced guidelines to steer individuals/businesses in this regard.  In fact, anyone can do a Google search for a service dog vest for sale, buy it, and upon receipt place it on their dog with no questions asked.  The defendant later admitted during discovery that the dog was not a trained “service” dog and only wore (and did not earn a service vest – most likely, to discourage prospective questions when she brought her dog into public places of accommodation/service.

During the dinner service, the waitress went to/from defendant’s table and testified that the owner took the dog off leash and allowed it to remain on the floor (and under the 4’ table) prior to the attack.  Toward the end of the meal, my client brought several doggy bags, napkins and condiments to the defendant’s table.  At this point, my client was facing the side of the table with her legs/knees fully exposed to the dog.  Shortly thereafter, the dog attacked and bit into the waitress’ knee.

A common defense tactic in Georgia dog bite claims is for the defense to claim that the victim teased, played with and/or provoked the dog into causing it to attack the victim.  In our case, the defendant claimed that the waitress provoked the dog before the bite by kicking it under the table.  Moreover, defendant advised that there was an independent witness to this provocation who had been sitting at a nearby table.  Defense actually requested table seating diagrams and measured tables.  Yet, that defense was shredded to the bone, as defendant was unable to identify this witness.  Additionally, that defense was implausible due to my client’s denial and common sense.  Servers working for tips do not attack guest’s family or animals…

After the attack, restaurant personnel led defendant and her dog outside of the restaurant as children inside became upset with the commotion.  My client screamed out loud after the bite and there was video (taken by a fellow employee) that showed freely flowing blood from her knee and down her leg.  She was taken to the back office in an attempt to clean the bandage the wound.  Later, it was decided that she seek treatment from an urgent care facility where she received professional cleaning of the wound – no stitches were required.  She also received a referral for physical therapy for her knee from her treating doctor, which she completed pursuant to a conservative timeline.

The local county animal control office was never involved in our claim as the owner left the jurisdiction and got quickly back on the road in her car with the dog.  Fortunately, the owner provided her contact information to the manager upon her departure.  Typically, in dog bite cases, the victim and/or owner will report the dog bite to local police/animal control that initiate an investigation, provide a criminal citation to the owner and subsequent court appearance.  Issues as to current vaccination status for the dog and any required quarantine were not explored until some time later.  And, the waiting game for my client to determine if she needed to undergo a series of rabies injection protocol was long and full of mental anguish.

Due to continued mental pain and suffering, my client sought professional counseling as the effects of the attack were numerous and apparent at work/school/leisure activities.  Fortunately, the counselor was able to help my client.  And, the wounds from the dog bite did not become infected. But, two scars did develop on her knee.  The wounds did not keloid and a plastic surgeon was consulted regarding a surgical consult.  It was determined that plastic surgery would not appreciably improve the outlook of the scar and may have caused further damage.

In the lawsuit, we claimed, among other counts, that the dog owner failed to restrain her dog, which proximately caused the attack and failed to act as a competent dog owner.  The dog owner continued to deny fault for the attack and we amended our lawsuit under O.C.G.A. 13-6-11 with a claim for attorney’s fees and litigation expenses, as the owner was being stubbornly litigious.  In the end, we were able to reach a fair settlement with the defendant’s homeowner insurer and dismissed the case with prejudice.

As always, dog bite cases are not easy and there are many pitfalls to the inexperienced lawyer.  At times, cases are won and lost depending on the nuances of the facts applied to ever changing law.  If you or a member of your family has been attacked by a dog, then please contact an experienced dog bite lawyer to discuss your particular facts.  The Law Offices of Kevin C. Ford is currently accepting dog and animal bite cases throughout the State of Georgia.  Please contact us today for a free consultation regarding your rights.