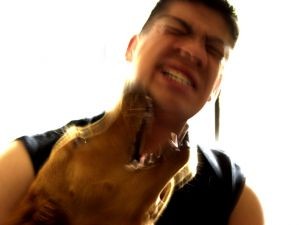 Over a year ago, a young vibrant 12-year-old little girl was walking and skipping in the street with her friends in her DeKalb County neighborhood at night.  At or around the same time and unbeknownst to her, a neighbor’s pit bull mix dog either pushed open a side door or gate and charged down the driveway and into the street toward the children.

Unfortunately, my 12-year-old client did not hear or see the pit bull until it was too late.  And the cries and shouts of her friends beforehand were wasted.  She turned, tripped and fell down upon the ground where she attempted to kick at the dog to protect herself to no avail.  The strength of the pit bull’s jaw leveraged down upon the victim, bit her to the bone and ripped a chunk of flesh from her lower leg.

The  adult male owner of the dog contended that the little girl provoked the dog to attack by kicking it in the street.  For what cogent reason a young child would kick a pit bull at night, the owner could only speculate.  Of course, the owner’s contention was a lie.

The little girl intermittently hopped and ran to the other side of the street screaming in pain.  The ambulance took her to the hospital where the wound was cleaned and dressed.  Several days later, the wound became infected, started to smell and discharge pus.  Again, the little girl had to go back to the doctor to get the wound cleaned.  Eventually, the site of the dog bite attack on the girl had scarred over and healed.  The color of the scar was darker and lighter in some spots than her surrounding natural skin as the bite had accumulated risen tissue in a keloid effect.

At this time, she was cognizant of the missing piece of her leg but was not yet socially conscious of the wound.  That conclusion was sure to come later in her life with wearing dresses and heels. The plastic surgeon opined that if the leg  was not surgically corrected, then the little girl would lose permanent strength and muscle deterioration in her leg.  The surgeon’s plan was to perform two surgeries.  The first surgery would involve the installation of a surgical balloon to stretch the existing skin to enable a subsequent graft new skin (taken from another spot) in the affected area.  The second portion of the surgery would be similar to the first.  In this way, the plastic surgeon would best be able to minimize the scar and maximize leg and muscle strength.

Unable to settle this injury claim with the recalcitrant insurer, I was forced to  file suit on behalf of the little girl and her mother. Along with extensive discovery, several long depositions were taken of the dog owners in which they denied previous attacks by the subject pit bull.  I decided to pound the pavement and spoke to several neighbors regarding this particular dog in the neighborhood.  I learned that the same dog had bit a younger boy in his backside less than 2 years before our attack.

Incredulously, the mother of this little boy contacted a TV law firm (first mistake) and then settled the claim of her son on her own  (second mistake) with the same defendant owner for the paltry sum of $900.00.   Defense counsel never provided the fact of this settlement to me – whether he knew or not was unknown.  Yet, I did find out and it changed the value of my client’s case tremendously.

The fact that I could now prove that defendants knew they owned and harbored a vicious and dangerous dog and negligently allowed that dog to attack my client  changed the paradigm of this case.  At this point, the lawsuit now had admissible facts for the jury to consider in awarding punitive damages. By way of explanation, punitive damages are damages (money) awarded by the jury to punish the defendant. Typically, these damages are non-dischargeable in bankruptcy and involve presenting evidence of the financial circumstances of the defendant to the jury.  Armed with this new information, I shot over a Holt demand coupled with  an offer of settlement under Georgia law for the entire insurance policy limit.

Now,  my client has more than enough money to undergo her two surgeries and move on with her life.  I was more than happy to work for her and to help bring back her pretty smile.

If you or a member of your family has been attacked by a dog, then please contact an experienced dog bite lawyer to discuss your particular facts.   The Law Offices of Kevin C. Ford is currently accepting dog and animal bite cases throughout the State of Georgia.  Please contact us today for a free consultation regarding your rights.