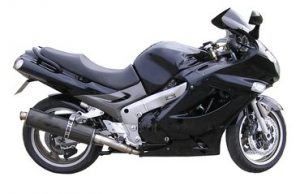 One of the leading international manufacturers of motorcycles has been sued by an injured motorcyclist following a crash allegedly resulting from Harley Davidson’s failure to warn Kenneth LaMountain about a defect in the cooling line system. More specifically, Mr. LaMountain, the plaintiff, crashed while operating his Harley Davidson motorcycle after the engine oil cool line line system malfunctioned, causing oil to leak onto the rear tire resulting in the motorcycle crashing and injuring the plaintiff.

There are several different legal doctrines upon which a products liability claim can be based. The first, a manufacturing defect, alleges that the motorcycle part in question was faulty or failed to conform with the specifications of how the part was normally designed and manufactured. Thus, when alleging a manufacturing defect, the plaintiff must prove that the product is more dangerous than a consumer would reasonably expect when using the product in its intended manner, or that the product is in a condition not intended by the manufacturer and the defect existed at the time it left the defendant’s hands. Moreover, the law imposes strict liability upon manufacturers where a product is in an unreasonably dangerous defective condition, meaning that any plaintiff who is a user, consumer or bystander injured while using a defective product may recover damages. Strict liability differs from a negligence action where a plaintiff must prove that the defendant owed plaintiff a duty, the defendant breached that duty, and the plaintiff suffered injuries as a proximate result of the defendant’s breach. Here, the complaint alleges that Harley Davidson should be held strictly liable for a manufacturing defect, as the oil clamps were in a flawed condition when it left the manufacturer’s control.

Furthermore, prior to filing a products liability suit, a plaintiff must consider all of the defenses available to the defendant. The most common defenses to products liability actions include misuse, alteration an assumption of risk. First, misuse will defeat a products liability claim where the plaintiff uses a product in a manner that is neither intended nor foreseeable. Here, the complaint alleges that the plaintiff was “a highly experienced motorcycle driver,” which is likely a strategic pleading used to try to combat any attempt by the defendant to allege misuse as a defense. Next, an alteration will remove a defendant’s liability when the plaintiff, or intervening distributor modifies the product at issue such that the product is no longer in the same condition as when it left the manufacturers control. Finally, assumption of risk will defeat a products liability claim where the plaintiff knows and appreciates the risk of using a device, and with knowledge of the risk he chooses to use the product anyways. In such a case, the plaintiff is barred from then holding the manufacturer liable. The latter two defenses, assumption of risk and alteration do not appear to be at issue in this case, although it is likely Harley Davidson will attempt to raise the defenses at some point in the litigation of the claims.

The likelihood of success in products liability cases, and tort cases in general, starts from drafting a complaint that effectively and accurately demonstrates legal liability from the relevant facts. Less specific, boiler-plate pleadings generally create an uphill battle from the plaintiffs from the onset. However, here, the plaintiffs’ attorneys appropriately named as defendants both the manufacturer and distributor, and identified specific theories of liability applicable to each defendant, increasing the likelihood of success from the start.

Attorney Kevin C. Ford has over 25 years of legal experience in handling motorcycle injury claims.  If you or a loved one has been injured in a motorcycle crash or bicycle wreck, then please contact an experienced attorney ASAP who can help you establish and prove your claim to the insurance company!  Please contact us today for a free consultation.