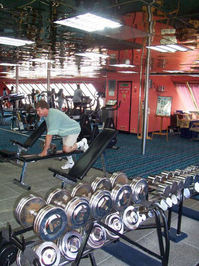 Let’s take a look at an interesting scenario. A young man in his late 20s is involved in a car crash through no fault of his own.  At the time of the wreck, he is coming back from the gym where he had a thorough workout.  The collision involved a side impact to his passenger door.  He experiences pain in his neck, shoulder and back at the scene and is transported to the hospital.  Upon release from the hospital, the ER physician tells him to follow up with his choice of health care providers for any continuing pain.

The next day, the man decides to visit a clinic that provides chiropractic and medical treatment.  He undergoes several months of treatment and, while his neck and back get better, his shoulder continues to be in pain and he experiences limited range of motion.  The medical doctor refers him for an MRI (magnetic resonance image) of his shoulder that enables the doctor to see the shoulder tissue. The MRI results indicate that the man tore the minor labrum (part of a ring of cartilage that helps to form the shoulder socket) and he undergoes surgery to repair the tear.

After surgery and several months of physical therapy, the man is able to obtain 85-95% of range of motion in his shoulder.  However, the orthopedic surgeon places the man on a permanent restriction of no military pushes or any activity that involves lifting his arms above his head.  Consequently, he is unable to perform about 30% of the exercises that he used to do several times a week at the gym to stay in shape and build muscle.

He attempts to settle his bodily injury claim on his own without success.  He hires an experienced personal injury attorney to handle his claim.  During the discovery period of the lawsuit, the man is required to answer interrogatories (written questions), requests for documents and a deposition (oral questions answered and recorded under oath) from the attorney who represents the at fault driver (and who is paid by the auto insurer).  In the deposition, the man testifies that he used to work out at a local gym six times per week, every week of the year, prior to the collision.  However, as result of the car wreck and his surgery, he now attends the gym only once a week due to limitations in his shoulder.

The defense lawyer, ever suspicious, decides to request the production of documents from the gym to determine if the man is indeed limited to one times per week since the collision.  As the documents are discoverable and may be relevant in the trial, the gym produces these documents to the defense lawyer without objection from the personal injury attorney.

Which hypothetical fact situations would be helpful/hurtful to the man’s personal injury claim:

In situation (a), the man testified truthfully in his deposition down and the records help bolster his credibility with the defense lawyer and more importantly, any potential jurors.

In situation (b), the man was truthful as to his attendance before the wreck but untruthful as to his attendance after the wreck.  In fact, the man’s testimony reflects that there was no real change in his ability to use the gym both pre- and post-wreck.  Not only is there a credibility issue, but also an argument could be made that the injury completely healed and there is no long-term impairment of the shoulder.

In situation (c), the man testified untruthfully as to attendance at the gym both pre- and post-collision. This testimony would certainly hurt the man’s case at trial, as his credibility would be impeached by the lie.

In situation (d), the man testified untruthfully as to his post collision activity at the gym and could be impeached at trial.  However, if he can prove that he was unable to work out at all due to his injuries and surgery, then he may be able to mitigate or lessen the impeachment.

In situation (e), the man lied about his attendance pre-collision, and the records reflect that he is now able to attend the gym six times per week.  The defense counsel would not only impeach the man at trial but also argue that the man fully recovered from his injuries since clearly he is able to work out on a regular basis.

Lastly, in situation (f), the man testified untruthfully—both in regards to his membership at the gym as well as his pre- and post-activity.

Whew.  The possibilities and scenarios are endless. We could easily see a mix of each hypothetical, which would make for an interesting deposition. A skilled insurance defense lawyer would carefully delve into all possible scenarios at deposition and attempt to create a factual scenario that would be helpful to the defense.

If you’re the plaintiff, without an experienced personal injury attorney to prepare you for a deposition, you could be helpless before the defense lawyer.  However, with adequate preparation, you should be able to testify correctly and confidently at both a deposition and trial.

The Law Offices of Kevin C. Ford is currently accepting car and truck wreck and collision cases throughout Georgia. If you or a loved one has been injured as the result of the negligence of a negligent driver, then please contact us today for a free consultation and evaluation of your case.  We have over 24 years experience and practice throughout the State of Georgia and can come to you.  Please call 404-869-6969 or use our toll free number (855) LAW-FORD to secure your rights today!