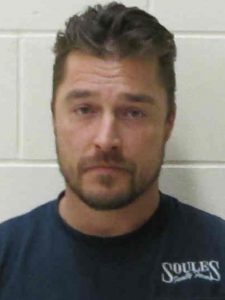 I was recently alerted to a DUI incident involving a celebrity and thought it would be an interesting addition to my blog.  From my cursory investigation, most of the information regarding this incident is listed on Radar Online; a site mostly dedicated to celebrity gossip and related issues. After reviewing this incident, the facts revealed that the celebrity had a long criminal history that demonstrated a pattern of drinking alcohol while operating a vehicle, fleeing accidents and failing to render aid to the victim. As such, the facts of the recent crash and criminal history are ripe for a legal analysis.

On April 24, 2017, Chris Soules, a former contestant on The Bachelor, was involved in a hit and run while operating his 2008 Chevrolet Silverado in the small rural town of Aurora, Iowa.  The area of impact was on a roadway which was straight without any possible visual obstruction. Specifically, Chris Soules was operating a large truck that rear-ended a tractor being operated by Kenneth Mosher.  Chris Soules got of his vehicle to check on Mosher (and attempted CPR) and called 911 around 8:20 p.m.  The 911 recording reflects a frantic Chris Soules noticed blood

(booking photo credited to Special To The Register)

coming from the mouth of Mosher.  Chris Soules later left the scene of the collision (and Mr. Mosher) before the police arrived and was picked up on the side of the road by a mysterious motorist in a red truck.  Alcoholic containers were found at the scene and apparently in Soules’ car. He was later arrested at his home.  A blood and urine sample was taken from Chris Soules several hours after the wreck and the results have not yet been released. Unfortunately, Mosher died from his injuries sustained in the wreck.  Chris Soules was not arrested until after the police presented a search warrant.  The police secured his cell phone after the arrest. A timeline of the events can be found here.

(Disclosure: purely a work of fiction and not fact)

Where there is smoke, there is fire.  If that is true, was this house smoking?  Is there any discernible reason why an individual would take the above-described actions to protect him from prosecution?

The estate of Mosher can and probably will file a civil lawsuit against Soules for wrongful death and seek all available damages and relief under Iowa law.  Depending on Iowa law, the estate could also seek punitive damages against Soules for causing a fatal hit and run collision.  Punitive damages are not meant to compensate but to punish. Such damages are not dischargeable in bankruptcy.  Punitive damages can be quite high when the defendant has a past history that reflects a pattern of operating vehicles under the influence of alcohol.  Let us look at the past criminal history of Soules to see if we can discern any such pattern.

Chris Soules had a prior DUI in 2005 in Fayette County, Iowa. According to that DUI report, Soule was found by police passed out at the wheel (accompanied by the strong odor of alcohol) with his car running.  He failed his field sobriety tests (FST) at the scene and his BAC result through intoxilizer (hand held device) at the scene was .08.  After he was booked into the jail, a blood test accurately analyzed his BAC as .200 (about 8-9 drinks depending on your weight).  He was found guilty and sentenced to serve 60 days in jail as well as 12 months probation and DUI driving class.

Soules was arrested for causing property damage with his vehicle and fleeing from the scene of the collision as well as failing to stop at a stop sign.  Allegedly, he failed to check on the condition of the other motorist.

On August 4, 2001, Soules received a citation by the police for having an open container (alcohol) while operating his vehicle.

Soules was fined and cited for possession of alcohol while being under the age of 21.

This is just a brief review of a sampling of the criminal history of Chris Soule. Yet, it is more than enough to show that he has a history of DUI, alcohol, and fleeing the scene of a collision without regard to the condition of the victim.  This history may be admissible at any civil trial to show a pattern that may be punished by the imposition of punitive damages.  Irrespective of this prior history, evidence will be introduced at civil trial reflecting that Soules fled the scene (and his victim) along with his BAC results which may be enough to warrant punitive damages.

Please note that the Law Offices of Kevin C. Ford is currently accepting car accident and wrongful death cases throughout Georgia, including collisions caused by a distracted driver. If you or a loved one has been injured as the result of the negligence of a motorist, then please contact an experienced attorney for a free consultation to document and preserve evidence and present your claim in a competent and timely fashion. We have over 25 years experience and can come to you. Please call 404-869-6969 or use our toll free number (855) LAW-FORD to secure your rights today