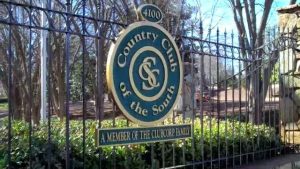 I recently settled another dog bite attack against an owner of an aggressive dog.  The dog owner (and dog) resided in The Country Club of the South – an upscale country club gated community in Johns Creek, Georgia.  My client is a UPS driver who had delivered packages to defendant’s home approximately 3-4 times prior to the attack- on these occasions; he did not see any dog or notice any dog warning signs on the property.  As with other dog bite cases, I mailed out letters to defendant’s surrounding neighbors to solicit information and instances of prior aggressive behavior from defendant’s dog prior to filing a lawsuit.

The Attack:  My client brought several packages up the driveway to defendant’s front door.  The front door had a glass window and my client did not need to press the doorbell as he could see the owner coming to the door. The defendant opened her door and two unleashed (violation of leash law) dogs came out and ran circles around my client.  Without provocation, the big dog (a German shepherd mix) jumped on my client and bit him several times on the arm and ankle leaving bloody puncture marks.  At the time of settlement, there were several small permanent scars on my client’s ankle.

Fulton County Animal Control:  Personnel from the County investigated the attack and wrote up a report.  Among other citations, the owner was cited for allowing her dogs to run at large while not under constraint and control of a competent person; violations under Fulton County and Johns Creek ordinances.  Typically, the city has the same dog ordinances as the county.

Fulton County Magistrate Court Hearing:  A practice tip to attorneys and victims of dog bite attacks should be to hire a court reporter to appear at the hearing and take down (record) the hearing for future use in any dog bite lawsuit against the owner.  In our case, I brought a court reporter and advised the Court of same prior to the hearing.  I also spoke to the investigating animal control officer to nail down the facts of the attack.  Just prior to the hearing, I met with the prosecutor and advised her that my client was present for the hearing and would object to any no contest plea by the defendant owner. As such, the Court did not accept a contest plea from the defendant and defendant refused to plead guilty to the citation(s).  Consequently, defendant was placed in a tough spot as the criminal case was bound over to the State Court of Fulton County for future jury trial adjudication.  In fact, despite this claim settling with the insurance company late last year, the defendant owner still has a pending date with the State Court Judge regarding the citations.  An interesting tidbit, at the hearing, the dog owner testified that she had never had notice of any prior issues/problems with the subject dog prior to our incident. Lie #1.  I used it against her later on in our case.

Prior Evidence of Aggression By The Same Dog:  There was evidence of several prior aggressive acts by the subject dog:  1) an admission by the owner to my client that a tree service technician was bit by the same dog; 2) two (2) prior attacks to the same UPS employee that first involved the dog cornering the driver and forcing him to put his DIAD in the face of the dog as it was trying to bite him and a subsequent incident where the dog came out through the back door and chased and growled at the driver all the way back down to the road; and 3) a different UPS driver was making a delivery to the owner and the dog came from the side of the house and chased him all the way down to street. The last incident prompted this particular UPS driver to advise the owner that he would no longer deliver packages to the front door and input the owner’s address into his computer system of dangerous dogs. Practice note for attorneys:  UPS drivers typically keep a list of problem dogs and share it with fellow drivers so be sure to ask for it from your client.  I assume FedEx drivers may do the same.  In our case, my client shared the attack with his fellow drivers at a meeting and one driver advised my client that he had problems with the same dog.

Settlement:  Due to my aggressive prosecution of this claim and the potential impeachment of the dog owner at trial, the homeowner’s insurance company settled the claim for my client for a sizable monetary sum.

SHARE INFORMATION OF DOGS WITH YOUR NEIGHBORS:  I can’t emphasize this point enough. If you want to prevent and stop bad dog owners from allowing their dogs to harm your fellow neighbor, then please consider sharing information regarding dog attacks and incidents to your neighbors, HOA and online (NextDoor).  By sharing information, you will make your neighborhood a safe place.

IF YOU HAVE QUESTIONS REGARDING A DOG BITE ATTACK: If you or a loved one is the victim of a dog bite attack, then feel free to contact an experienced attorney with trial experience in these matters.  I am currently reviewing and accepted dog attack claims throughout the State of Georgia. Please contact me immediately as any delay may result in lost evidence that is crucial to your claim.