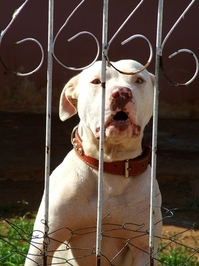 The American pit bull terrier, better known as the pit bull, has an extensive background of unprovoked attacks on animals and humans alike.  Some are deadly.  Unfortunately, that was the case yesterday when a pit bull (and a border collie that is missing) attacked two children on Cerro Street in Atlanta as the children were walking unattended to school.  There were actually three children but only two were attacked.  The young boy who passed away from his injuries was Logan Braatz (6) and the injured girl was Syari Sanders.  The news story regarding the attack seemed to imply that the boy was beyond help at the scene. The young girl is still treating at the hospital and was listed in stable condition.

Fulton County Animal Control arrived at the scene as did the police.  The story implies that one dog was shot by officers and that one dog is still missing.

Typically, a pit bull will attack at the most vulnerable part of the body, be it human or dog, and that is the neck.  The strength and pounds per square inch (PSI) of a pit bull bite is off the charts. Once a pit bull has attached, it is very difficult to get the dog to release. In some attacks, folks have positioned a wrapped up thick bath towel and moved it in position of the pit’s mouth to replace the animal or human that is being attacked.

It is unknown whether the neighborhood in which the attack occurred had any restrictive covenants banning the ownership of pit bulls or other dangerous animals. Typically, you will see such covenants in newer neighborhoods.  The covenants would bind the homeowners  (and presumably tenants) from owning certain breeds of dogs – typically the more aggressive breeds such as rottweilers and pit bulls.  And, the covenants have teeth inasmuch as the covenants can be enforced in a court of law and the homeowners association may receive an award of legal fees and expenses against the homeowner/tenant.

It is also unclear whether the owner, Cameron Tucker, was a homeowner/tenant that had applicable homeowner’s insurance that covered the dog attack.  More and more, insurance companies will not insure a home if the owner/tenant possesses a dog with prior bite/attack history or is one of several breeds deemed to vicious or dangerous by the insurer.  Irrespective, the parents of the children could still file a civil suit against the owner for damage for wrongful death, medical expenses, pain and suffering and punitive damages (damages meant to punish the owner as opposed to compensating the victims).  In most cases, if the owner does not have insurance, then the homeowner/tenant probably does not have requisite assets to compensate the victim.  However, a punitive damage award against the owner is not dischargable in bankruptcy and would remain indefinitely with the owner if certain conditions are met.

It is not clear at this time whether or not Cameron Tucker will face any criminal charges for the attacks by his alleged dogs.  My understanding from recent news reports is that the owner has been charged with two counts of reckless endangerment.   Depending on the jurisdiction/state in which the attacks occurred, owners may face other criminal charges as follows:  1) a dog owner could be charged with murder or manslaughter when a person dies as a result of a dog attack depending on the specific facts; 2)  a dog owner could be charged with criminal assault if the dog is considered to be a deadly weapon; and/or 3) a dog owner could face destruction or concealment of evidence if the owner destroys or conceals a dog after the attack.

Time and time again, we hear news of another pit bull attack across the nation and we see children, teenagers and adults walking their pit bulls down the sidewalks. Some children are so small that they would not be able to restrain the dog in time of need. Some teens and adults seem to act as if they are above the law.  Some folks are brainwashed into thinking owning a pit bull is consistent with making a trendy statement to the world. Something needs to change.  Something needs to be done.  The cumulative injuries, pain, suffering and death from dog attacks is needless and horrific.

If you or a loved one have been injured by a dog or animal attack, then please contact an experienced dog bite lawyer immediately.  Time is of the essence as crucial information and evidence needs to be secured as soon as possible. The Law Offices of Kevin C. Ford is currently accepting dog bite cases throughout the State of Georgia. Contact us today to secure your rights.